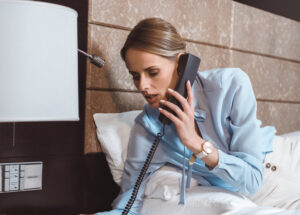 The National Emergency Number Association (NENA) estimates that there are 240 million 911 calls placed in the U.S each year.  But in many instances the specific location of the caller could not be determined when calls are placed from hotels and multi-floor businesses.  The phone systems used by some businesses do not provide a precise location and when the caller is unable to give the location details, emergency responders are only provided with the building address but not the floor or room number of the person in distress.

It was also common practice for hotel phone systems to require the caller to dial 9 or a similar digit to place calls outside of the hotel, even to dial 911.  As a result, many 911 calls failed to connect, causing unnecessary delays and even death.  RAY BAUM’s Act and Kari’s Law require that hotel phone systems provide direct access to 911 and are equipped to identify the specific location of the caller.   Typically, emergency responders are able to quickly and efficiently manage 95% of 911 calls.  However, prior to Ray Baum’s Act and Kari’s Law, the survival rate of victims fell to 10% due to EMS being unable to locate callers in large buildings or hotels.

Kari’s Law and RAY BAUM’s Act aims to decrease the loss of life by ensuring that callers can directly access 911 from hotel phones and that hotel phone systems are equipped to identify the specific location of the distressed caller.  Kari’s Law became effective after February 16, 2020, and is named in honor of Kari Hunt, who was killed by her estranged husband in a motel room in Texas in 2013.  Kari’s 9-year-old daughter attempted to call 911 four times from the motel room phone, but the call was unsuccessful because the motel’s phone system required dialing “9” before dialing 911.

Get a Quote for Your Hotel

Ray BAUM’s Act requires that after January 6, 2021, that hotel phone systems be programmed to show the caller’s exact location during an emergency call and hotel phone systems must provide direct access to 911.  The final requirement for Ray BAUM’s Act took effect on January 6, 2022, and hotels and resorts should ensure that they are in compliance, as it could mean the difference between life and death.  Hotels that are not in compliance can face financial liability and negative exposure that could impact the hotel’s reputation. 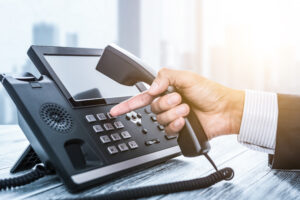 The final requirement for Ray BAUM’s Act took effect on January 6, 2022, and PBX phone systems play an essential role in allowing hotels to comply with emergency dialing laws.  PBX (Private Branch Exchange) is a privately managed telephone system that is primarily used by hotels and other businesses.  Hotels typically utilize two types of PBX phone systems, on-premise and hosted PBX.  On-premise PBX is managed on the hotel’s premises and connects via a Public Switched Telephone Network (PSTN) with the use of traditional phone lines.  Hosted PBX phone systems are cloud based and rely on an internet connection instead of traditional phone lines and is fully managed off-site by service providers.  Regardless of the type of PBX that hotels utilize, they can ensure that PBX phone systems comply with Ray BAUM’s Act by switching to an SIP Trunking service provider.

Hotels can utilize S.I.P. Trunking to ensure that phone systems directly access 911, to provide callback compliance and to provide accurate location information.  Callback compliance can be achieved with the use of DID to guest rooms and the use of a Location Information Server (LIS) allows hotels to provide accurate information about the caller’s location.  It’s also important for hotels to partner with a provider that is familiar with and preferred by your hotel’s brand and one that stays up to date with the ever-changing laws surrounding guest and staff safety.